Meet Tasnim Ahmed, a Bangladeshi-American writer out of Brooklyn, NY. We chatted with Tasnim on holiday traditions and festive dressing as a Muslim woman. 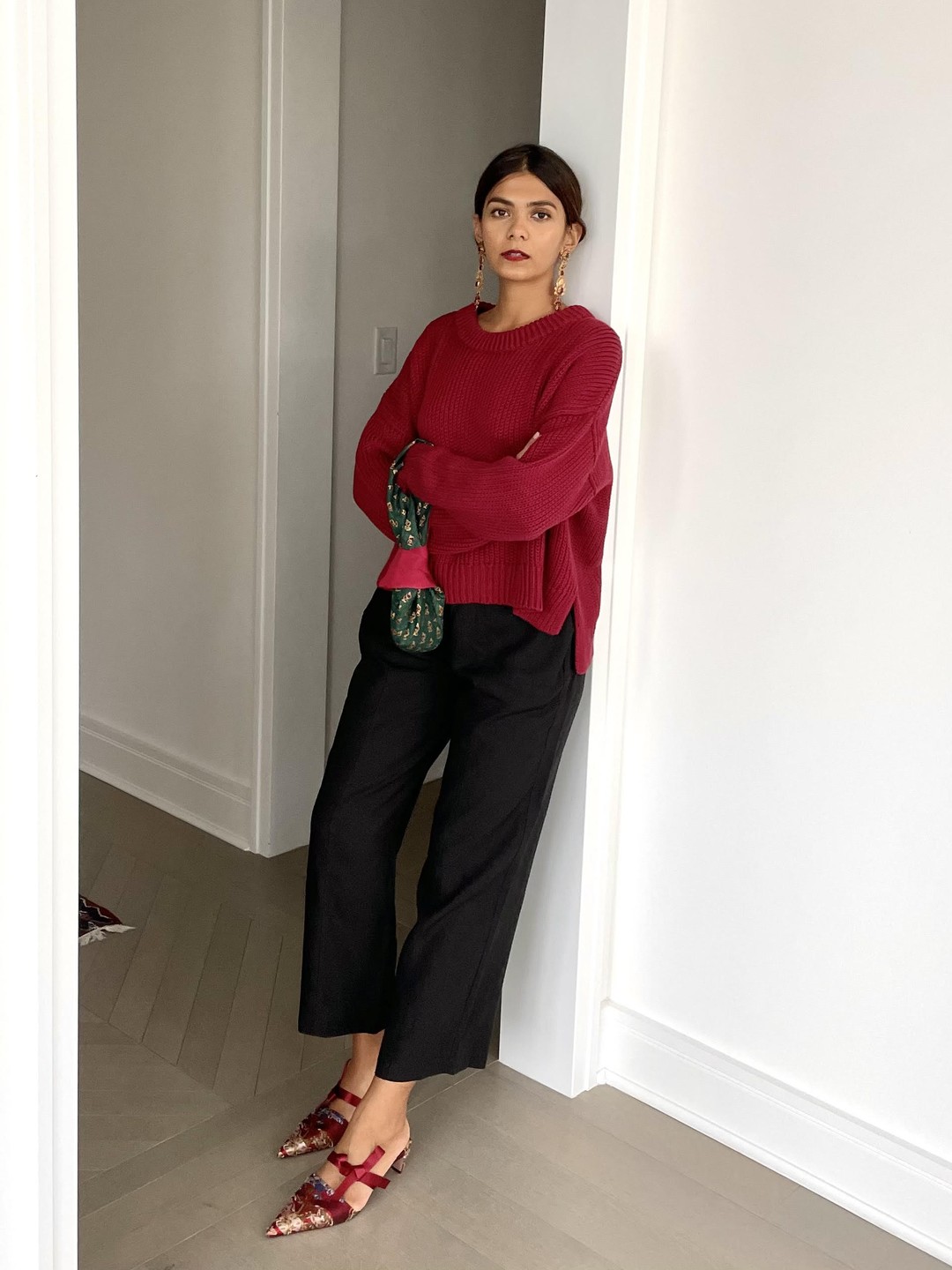 Tell us a little bit about yourself!

I'm a writer based in New York. I write about beauty, fashion, art, culture and identity but with a focus on highlighting the South Asian experiences and that of other marginalized groups.

My family moved around quite a lot when I was a child into early adulthood. I was born in London, where I lived for a few years before moving to Dhaka, Bangladesh. I left again to study in Toronto, before moving to America and eventually landed in New York, and I have been here for nearly eight years.

Living in New York was always my dream. I was raised on a steady diet of literature, films and music that all agreed there was no place quite like it. I had a very romanticized view of the city, and soon after I moved here I realized that it was also very important to read between the lines. There are times when I felt like New York wasn't for me, and other times when I could think of never living anywhere else. Like a lot of relationships we started off at extremes but now, I think, we're at a happy medium.

My hunger to move to New York was accelerated after I moved to America. I lived close to half of my life around people who looked like me, where my otherness wasn't so stark. In Toronto, I was contained within this bubble of a university where it felt very multicultural, and in the larger context it's not exactly the reality of that city, but I felt seen. When my family and I moved to America, we initially lived in a very small suburb in Maryland and then to a slightly livier one which fell silent by sundown. What felt more alienating, more than the stillness, was that at most places I worked at I was the only person of color, and certainly the only Muslim. I traded in a lot, small indignities that grew, from giving free reign over my name to fading into the background, trying to assimilate as quickly as I could without being "found out". For a while I was ashamed of who I was, where I came from, my faith. I think people have a general idea of the extreme cruelties Muslims have faced in this country, but very few know the daily pain and trauma we carry with us, not of just the past twenty years, but for a shamefully long time before that.

There came a point when denying my culture and my faith became suffocating, that I was allowing myself to be erased. I craved to live in one of the few places in America where everything wasn't always perfect, but there's space to be other. I honestly feel that New York's lights would dim without us outsiders.

What are some holidays you celebrate? Did this change when you moved to the US?

Twice a year my family and I celebrate Eid. Unlike Western holidays, its dates are based on the lunar calendar, which means the moon has to be sighted. When I'd have to take time off from work for Eid (because it's definitely not an American holiday!) I'd always have to say, "I'll let you know the exact date when the moon shows itself!"

When I moved to America, my parents and I would work really long hours, save up everything we could which meant no vacations, so the only long breaks we'd get were around Thanksgiving and Christmas. We don't celebrate Thanksgiving and Christmas (for separate, perhaps obvious reasons), but we thought of it as vacation time. It's been the only time we spend time together and make elaborate feasts, but what we prepare is not very traditional: fried chicken and biryani have been on the menu, but never together. This year I want to incorporate my husband's childhood memories, so there'll be mashed potatoes but a roasted chicken instead of turkey. 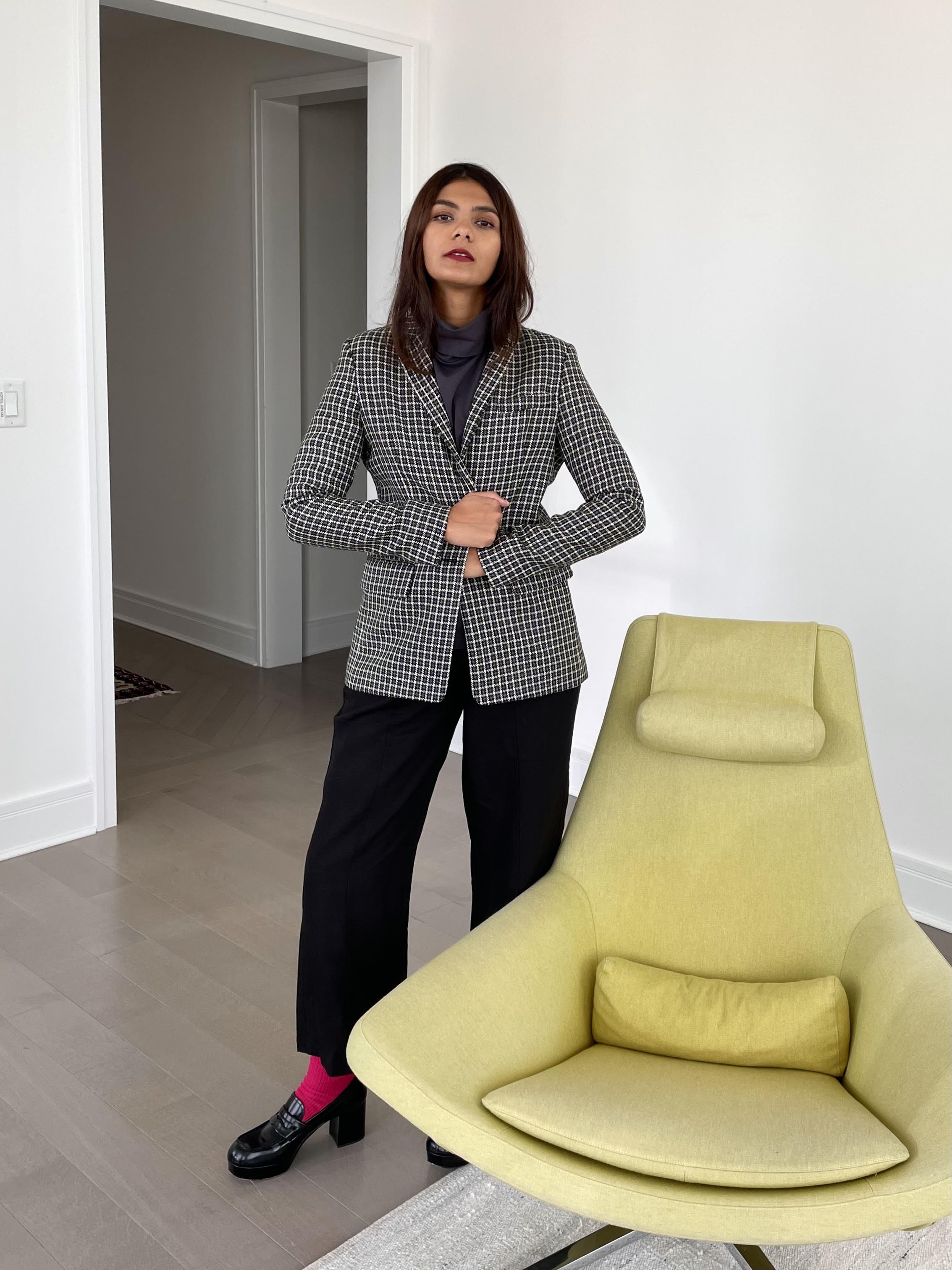 What are some traditions you have created around the holiday season?

When I lived in London, my parents would bundle me and my cousins up and take us for a drive around central London before Christmas. We'd be in awe of the lights and the displays, and then we'd go to Hamleys, which was an enormous toy store, and it was like what I imagined heaven to be. I brought back that tradition after moving to New York. I'll go over to my parents' and together we make our way down Fifth Avenue to see the tree at Rockefeller Center and all the beautiful window displays. For someone who never had a Christmas tree growing up, I love this time of year. I almost always make sure to host friends before the New Year and I feel pure joy just seeing things like the holiday lights or the bustling Christmas markets.

With holiday parties and gatherings kicking off next week, we’d love to know how you approach dressing?

My approach to dressing is typically "Always better to be overdressed!" and during this time of the year I take it up a few notches, to the point where my husband will be baffled that I'm dressing up to go on a routine walk. For gatherings and parties I embrace volume, jewel tones and statement jewelry but balance it with pieces that are warm and cozy. 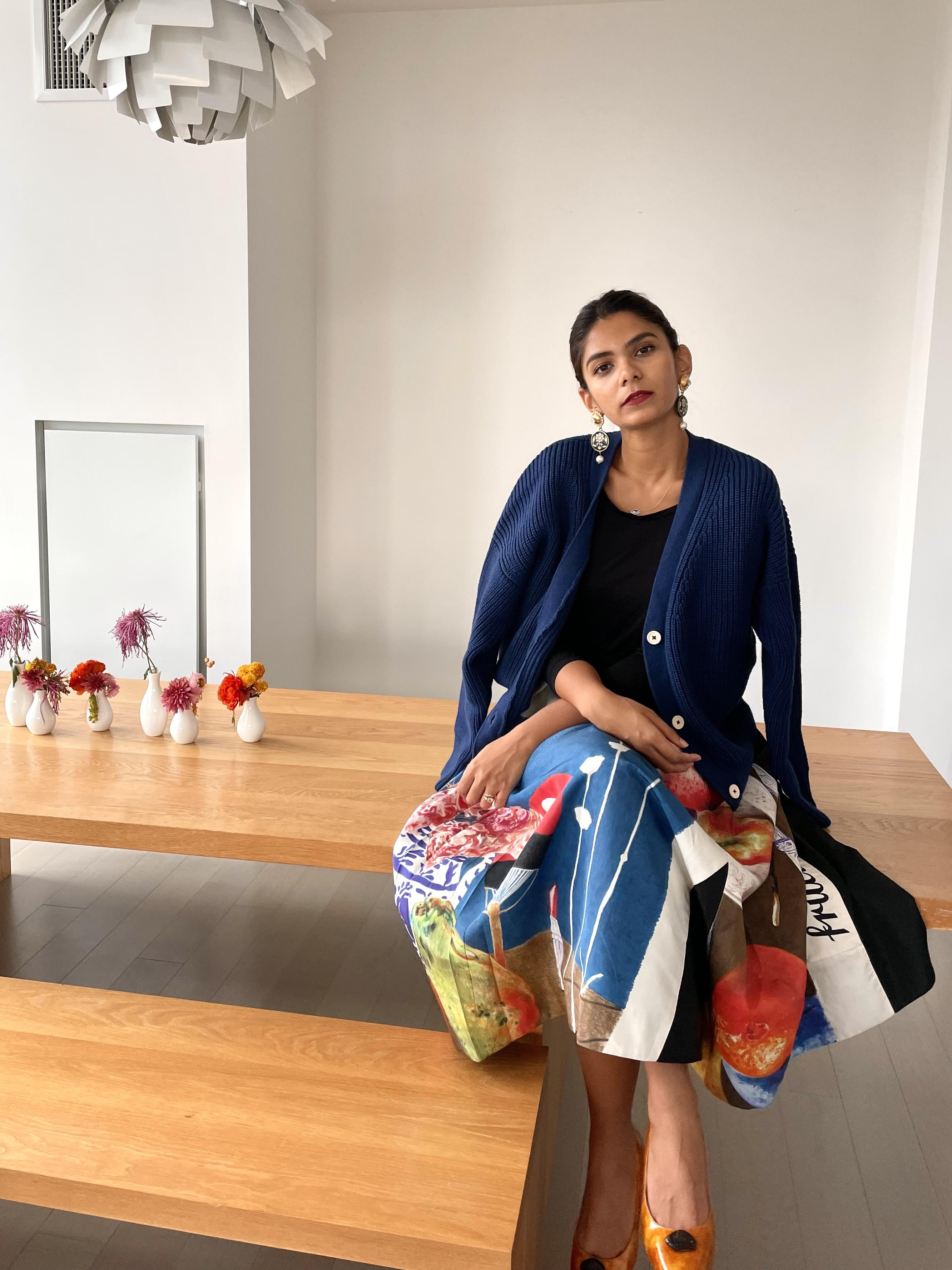 What are some of your favorite winter staples?

I love a chunky sweater and knee high boots. There's so many outfit combinations that come out of good foundational pieces.

Dressing modestly does not equal dressing plainly… how do you spice up an outfit?

I dress modestly according to my company. When I'm around my parents or family, I factor in modesty as a part of my outfit out of respect for my elders – it's just the way I was brought up. I think many people believe dressing modestly as some kind of regression for women, but there are so many women who choose to dress in a modest way for themselves. Muslims in particular get a lot of flack when it comes to the way we dress ourselves and people tend to forget so many other cultural groups where women and men dress modestly.

Dressing modestly most definitely does not equal dressing plainly. I know so many women who dress modestly with so much flair; if anything, there aren't enough designers and brands thinking about the diversity of women. Accessories are certainly the easiest way to bring life to any outfit. My favorite thing to do is to wear my South Asian-style jewelry with Western clothing, and have recently been exploring with brightly colored socks. A fun pair of shoes is also another great way; it's the one area where I've never shied away from color, and my neutral-colored shoes have to have some kind of oddness about them.

I recently had friends over for dinner and we all dressed up for the occasion. I paired a simple black long-sleeved top with a favourite secondhand long and voluminous skirt. To make it more festive I wore electric blue glitter eyeshadow and a cozy blue cardigan to keep warm. It's something that I would just as easily wear to have dinner with my family (although my mother would take one look at my glitter eyeshadow and grimace). A patterned blazer with a solid turtleneck and bright pink socks or a ruby-colored sweater with matching silk shoes and wide legged pants make me feel chic and very much myself, no matter the company.