The Tradlands Cost Per Wear Promise

Cost Per Wear (CPW) is a term you may be hearing on social media lately. We thought, at first glance, that it’s one of the new terms that is thrown into the larger umbrella of ‘Sustainable Fashion’.

But when we took a closer look at both the term and the equation behind CPW, this terminology takes on something even greater than just sustainable fashion. It’s bigger in so many ways. 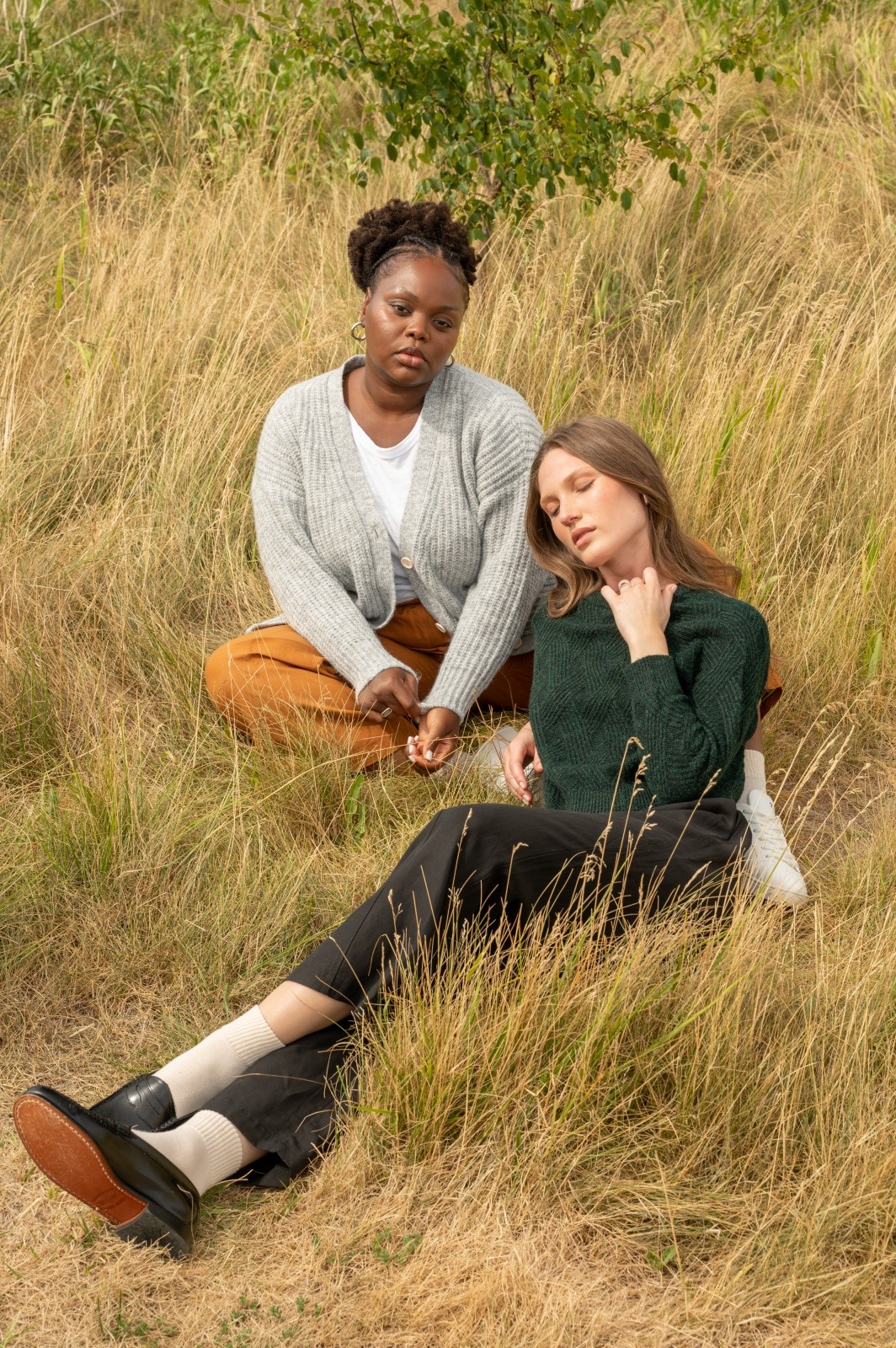 Cost Per Wear + The Bigger Picture

Despite how times have changed, we’re proud as a brand to continue to maintain high standards when it comes to being sustainable, slow-fashion focused, and environmentally attentive with our vision and mission — the bigger picture, if you will. As a small brand, we may not be everything to everyone but, we feel confident in the efforts we’re putting forth. The impact we’re having on our community, our industry, and our world matters. Things change quickly but we’re always trying to reassess and keep moving forward toward making our goals a reality. 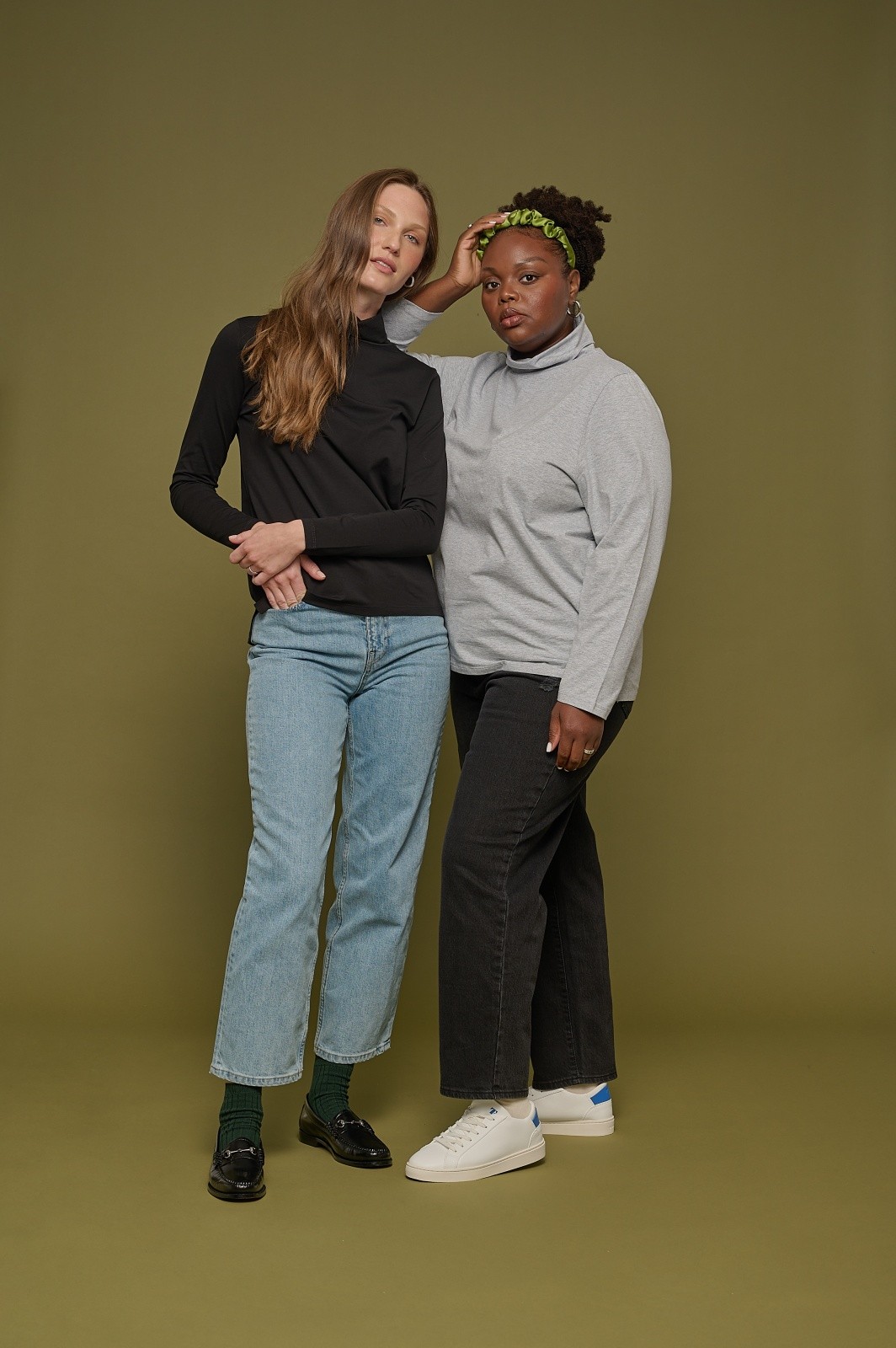 Tradlands was built on the foundation of creating high-quality closet essentials you will love to live in for years to come. We were inspired by the durability and quality of menswear and created styles that we love with the same everlasting build.

While this has been our focus, we’ve also made continuous and intentional efforts to do good for the environment, the people, and the industry that we work with. Instead of trying to be all things to all people, we’re using our corner of the world, our sliver of the internet, to focus more on the impact of cost per wear. We want to educate and inspire our already thoughtful customers into becoming more conscious consumers by buying fewer, higher-quality pieces that stand the test of time.

What is Cost Per Wear?

Cost Per Wear (CPW) is simply an equation to measure the quality of the items you’re buying. Don’t worry, the math isn’t too hard. One of our fundamental goals is to combat the idea of fast fashion being the only way we can buy. The need and pressure to keep consuming and buying more only to have these items thrown away in a few months, damaged after very little use, or seeing wasted money hanging in your closet, leaves us discouraged and consumers unfulfilled. This is why we created closet essentials. Those chameleon pieces that become the foundation of your wardrobe. The essentials of a curated closet — that’s what we’re aiming for.

With a focus on quality, long-lasting staples, CPW is a core principle when creating our clothing.

When it comes to CPW, the equation leans toward items that are initially more expensive, but turn out to be cheaper per wear over time.

To analyze CPW in real life, let's look at button-ups — one of our OG styles. If you go the fast fashion route, five button-ups from a mall retailer might be $30 (Old Navy) or $80 (Madewell). There are wide price ranges within fast fashion, just like there are ranging prices in higher CPW fashion too.

Many people go to the local mall and grab five cheap button-ups to wear to work. If each one costs $30 you spent approximately $150.00 on five shirts. Now, when you compare this to some of our button-ups, you’re thinking these five shirts from the mall are a steal. Our button-ups, on average, are $120 - 150.00. 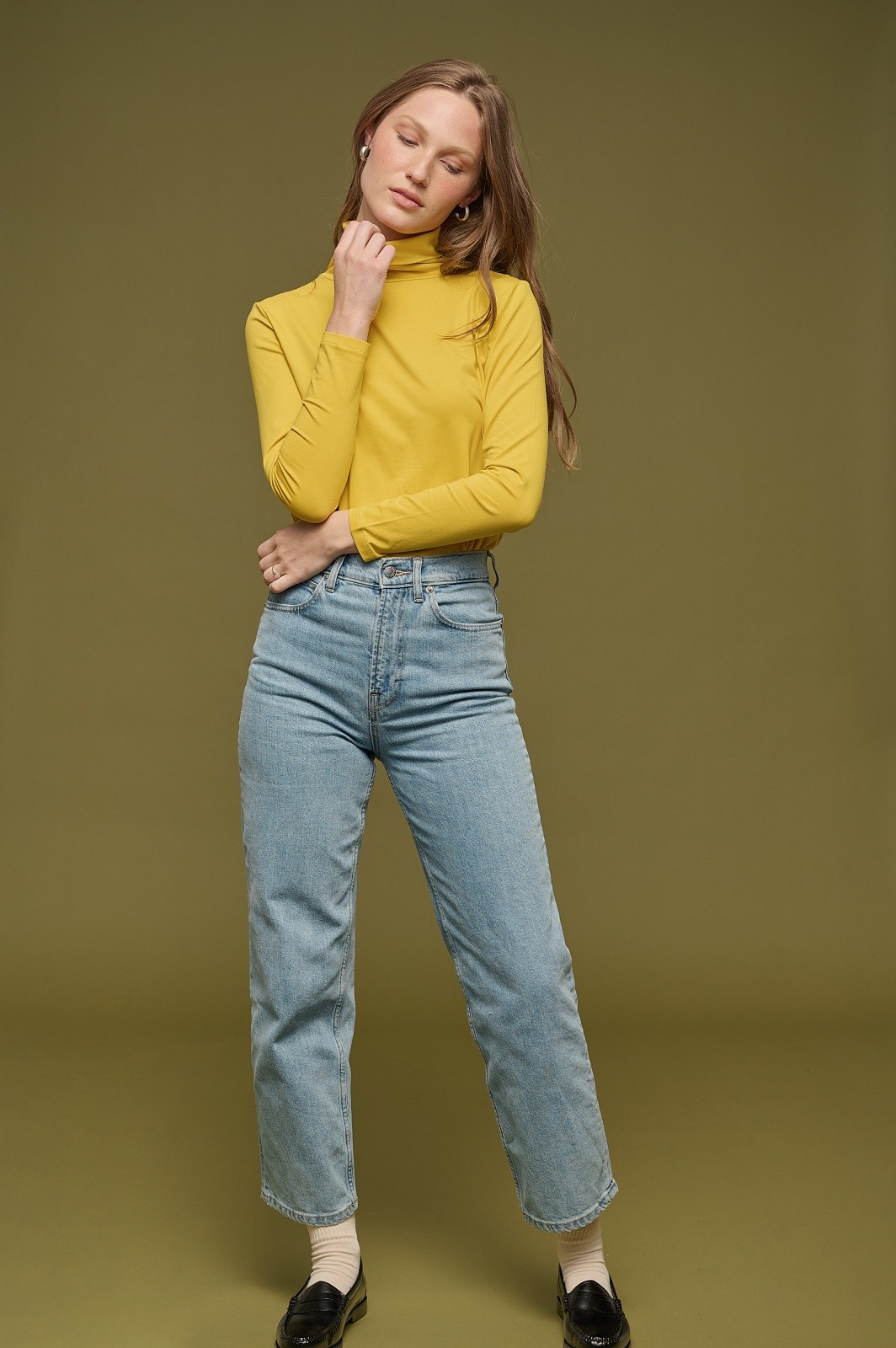 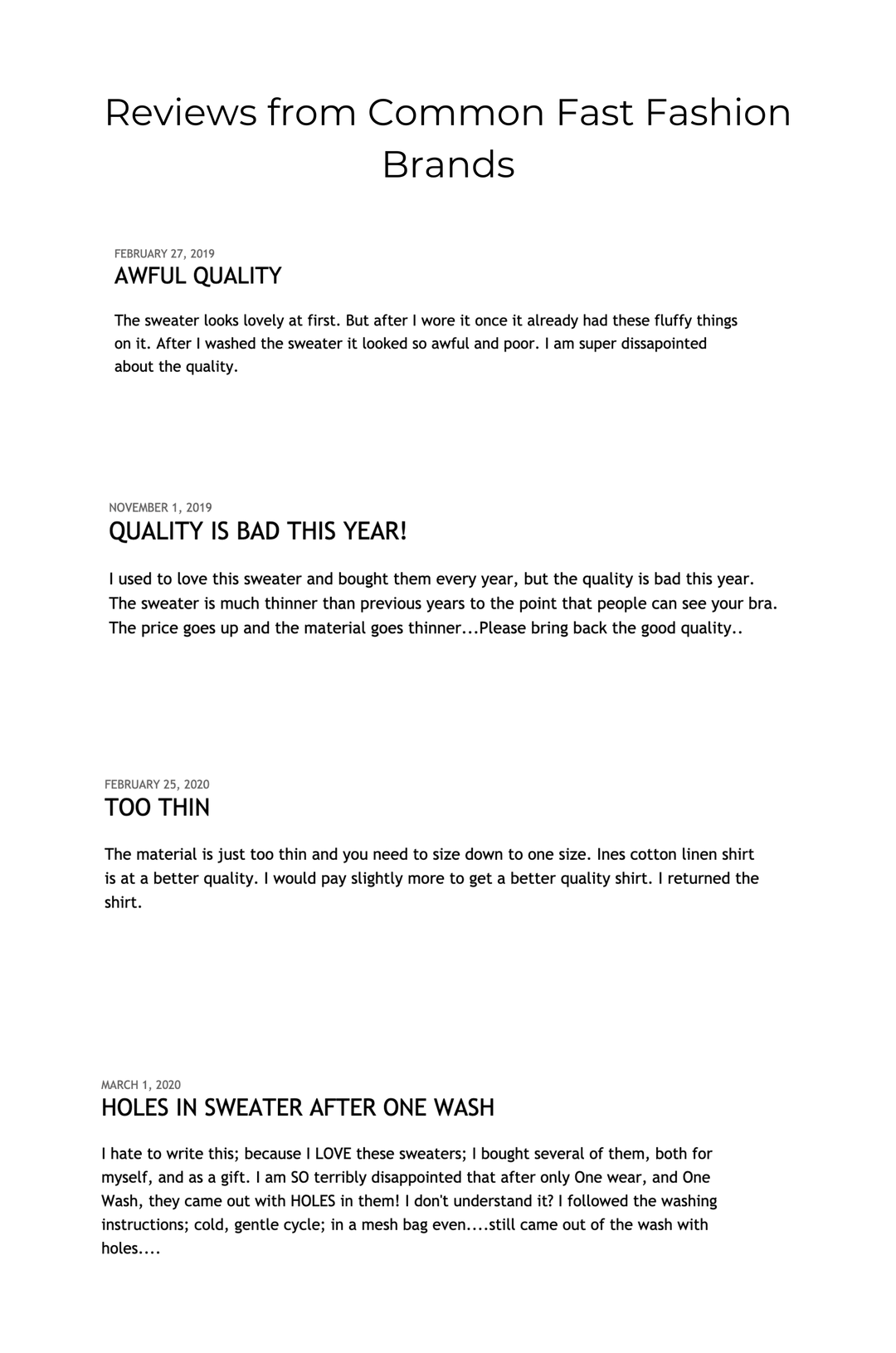 After only a few wears your noticing pilling, loose threads, and buttons are now disappearing into the abyss. In about 6 months, you’ve stained the armpits, mashed the collars, and pulled off numerous buttons of the first five button-ups you bought. You’ve washed these normally and the fabric is nearly threadbare, plus the stains are sticking around longer due to low-quality fabric. All of them are in rough shape and it’s time to get five more cheap pieces to finish out the year.

You spent $30 on a single shirt and got maybe 10-15 wears before it started to break down. And 10 wears would be groundbreaking compared to the average which is only around 5 wears. The cost per wear is the price ($30), divided by the number of wears (10) so it costs about $3.00 per wear, per shirt. You spent $30 on a shirt and in less than 10 wears it starts to break down.

10 wears would be groundbreaking compared to the average which is only around 5 wears. The cost per wear is the price ($30), divided by the number of wears (10) so it costs about $3.00 per wear, per shirt. Whereas, when you pay a little more upfront for one $150.00  high-quality button-up that lasts over a year and could reach well over 100 wears or more, your CPW for the higher-priced button-up costs you less in the long run, at less than $1.50 per wear and going down while the button-up is still standing strong. Not to mention you didn’t throw away five or more button-up shirts which causes waste and adds to landfills.

Plus, those five button-ups were likely made in a factory somewhere whose purpose is to churn out as many units as possible in the least amount of time. These same factories who ignore their waste, cause pollution, and likely have lower standards for working environments.

Then we get into shipping giant pallets of clothes that are stacked miles high on barges or planes traversing the globe leaving waste and chemicals in their rearview.

Finally, it makes its way to your local mall or online retailer of which only a few will sell and the rest will be thrown away only to start the cycle over again when a new trend comes up. Or, they go home to either be worn often to a quick demise or collect dust in the back of the closet.

You have to take your own budget and circumstances into consideration when it comes to CPW. We understand investment pieces might not be possible. We’re advocating for a conscious look at your clothes, if it works for you.

Will you still want to wear this in 10 years?

Is this going to become a closet essential or another insignificant piece?

Is this piece something that can be styled in numerous ways?

Is this something you can picture yourself loving for many years? 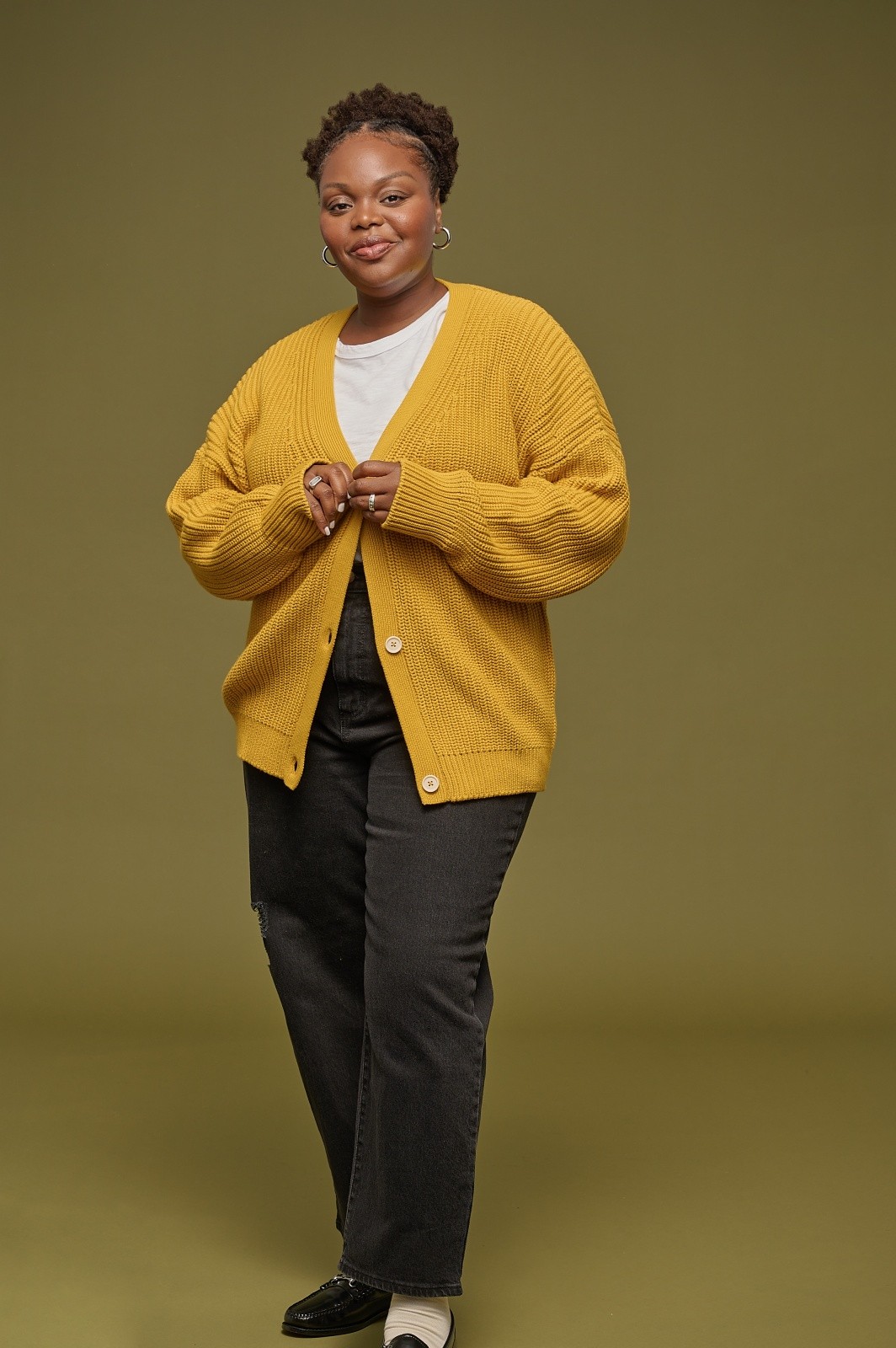 We understand that thinking about your closet as a whole is easy, but taking a close, intimate look at each item in there can seem overwhelming. The idea is to buy now in order to prevent future spending, future waste, and future trend-chasing and increase how often you wear a product and how long that product lasts over those wears.

And when the time comes that you change your style or fall out of love with your pieces, you can always find better ways to give new life to your older styles. For us, we offer customers to re-sell their pre-loved items through the Worn Well Exchange. 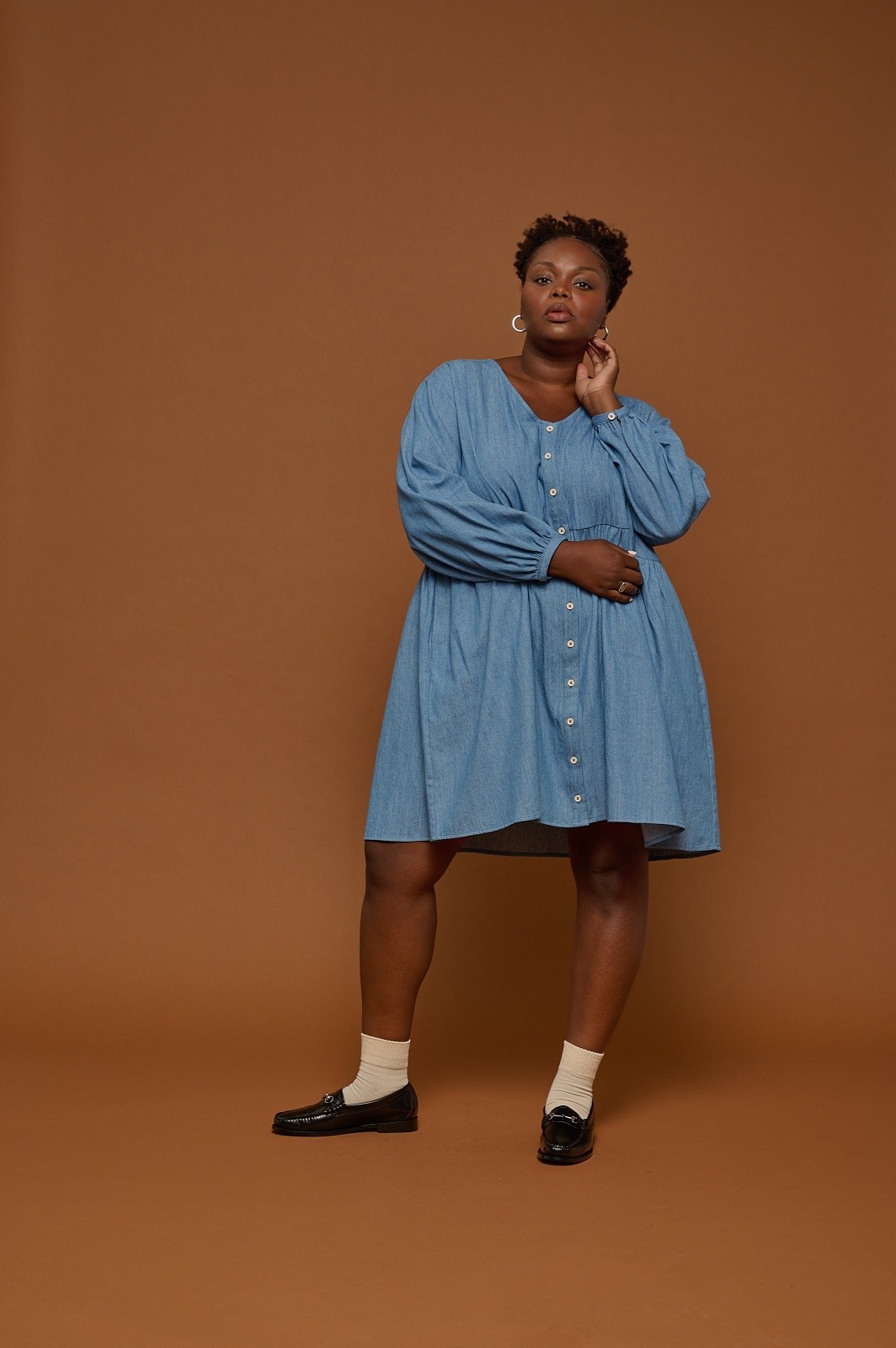 The values that you care most about personally, and the values and standards you hold sustainable businesses to, are all interconnected when we focus on CPW. These include high standards on ethics, sustainability, environmentalism, human rights, and more. Let’s break this down and see how CPW impacts the greater good.

If you implement changes, even small ones, based on CPW principles in your own wardrobe and really focus on buying high-quality but purchase fewer pieces because of it, you’re impacting much more than you think.

Improved CPW for you means:

Overall, when we, both businesses and buyers, work together and focus on CPW when choosing, designing, creating, and buying clothing, we get all the benefits. We bring awareness to environmental impacts, influence companies to raise their standards — aiming for sustainable fabrics and materials - and create safer and overall more sustainable business practices and buying habits. All of these cumulate to bringing you higher-quality, longer-lasting products that you’ll be able to love for a long time and feel good about buying.

The Cost Per Wear Movement

Join us on our journey — and on the same journey as many others — to start building a more curated wardrobe with thoughtful, timeless classics that act as the chameleon pieces of your style.

We understand the price point for higher quality clothing is often a stretch and that this doesn’t work for every person or every budget. And that’s okay. If you’re able, or you want to make a personal impact, you can first start to reshape your mindset and think of each wear as a cost instead of the product itself as a cost. You’ll be much more likely to buy clothing that’s timeless in its style and durable and high-quality in its design. Plus, there are resources out there to help lighten the load.

We add carefully crafted details to make sure these pieces add to your wardrobe and your happiness. Not only that, we work hard to create foundational and quintessential styles that will help put an end to fast fashion, so we can ditch consuming low-quality clothing pieces that don’t last. We’re inviting you to join us in thinking about what you wear in a completely new way.

Let’s work together to buy better clothes and create better buying options because spending consciously and aiming for a positive impact never goes out of style. 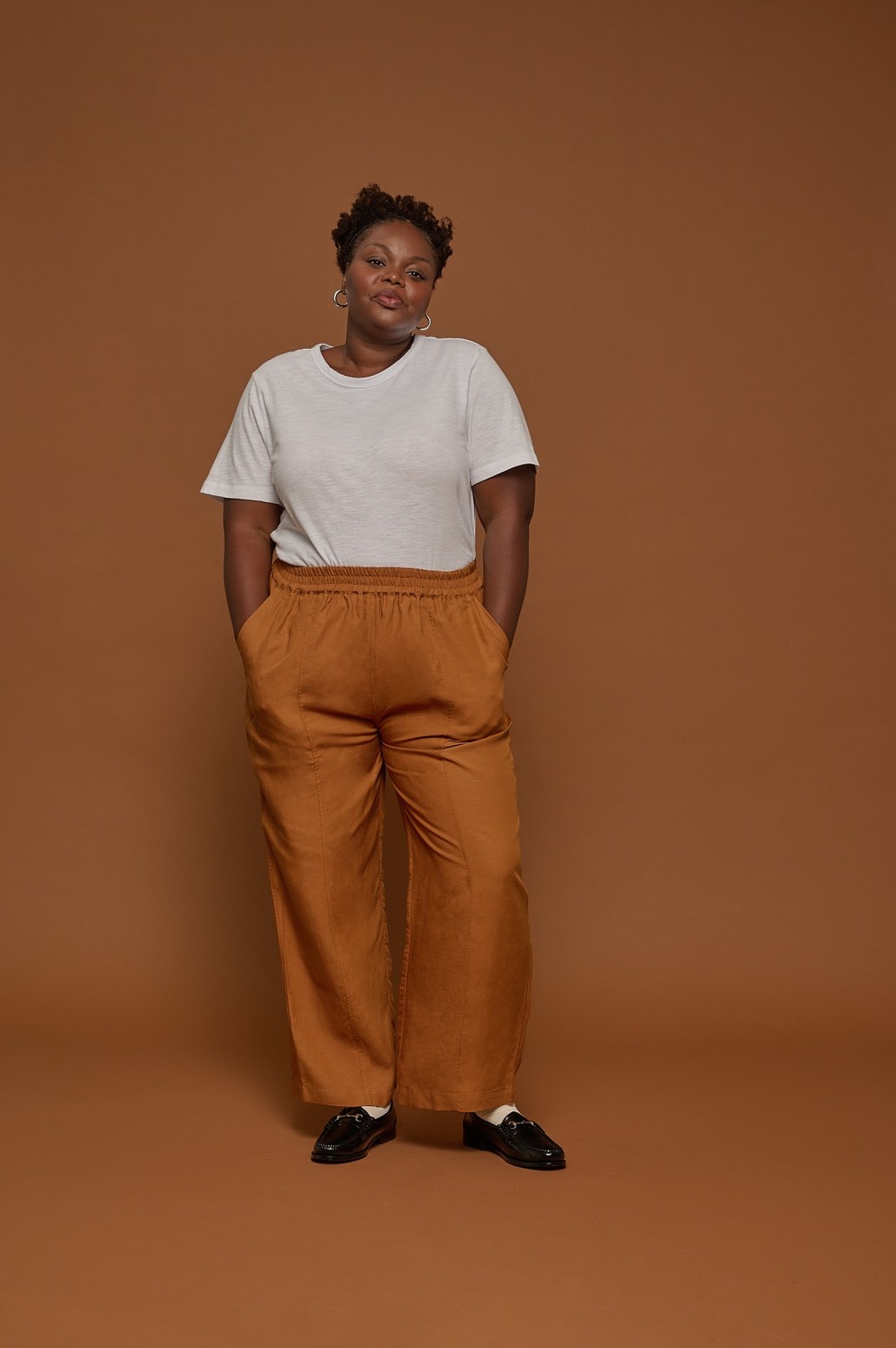 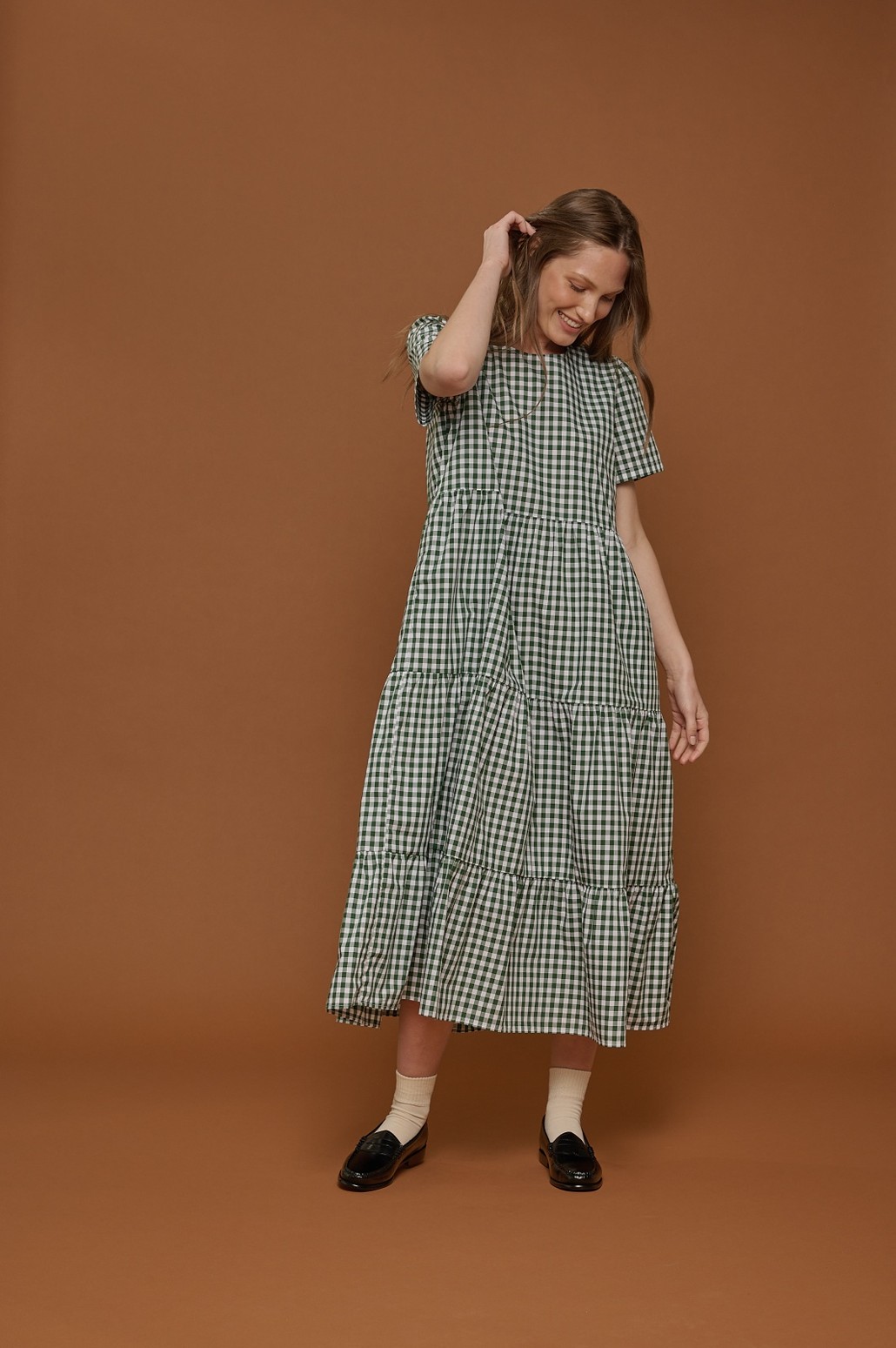 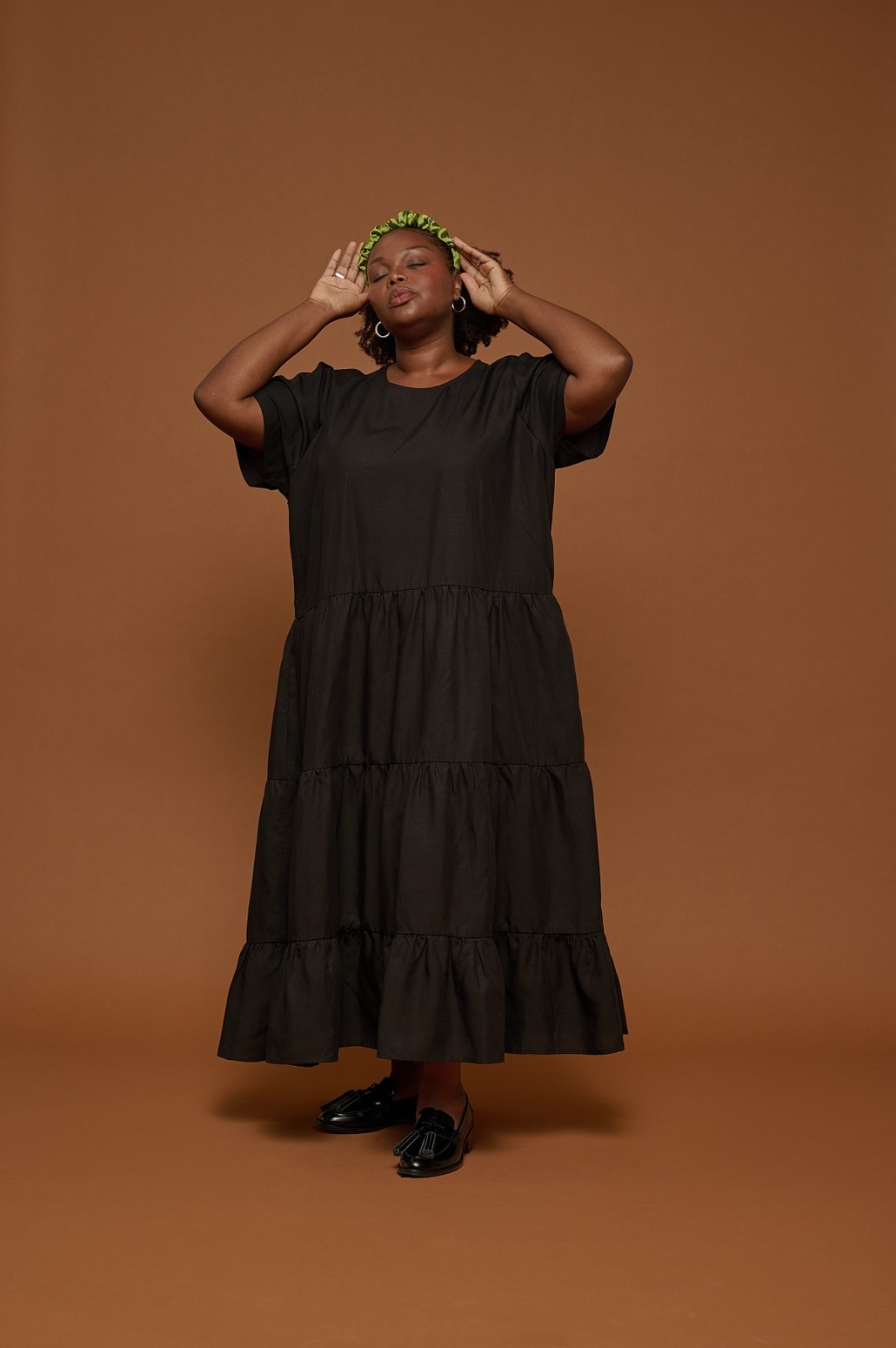 Here are a few amazing Tradlands partners who have helped us, and many others, evolve in their thinking about spending, buying, and dressing. They’re inspiring, creative, and thoughtful in their approach and have great resources to learn more about what CPW means to them.

In addition, you can use these hashtags to join in on the community on Instagram:

Whatever you do, know that we’re in your corner. We’re all humans and we need to support each other if we want to see changes made in a positive direction. We’re always looking for ways to improve and hoping you’ll do the same.

What are your thoughts? How would you implement Cost Per Wear?

New to CPW? Let’s hear your initial thoughts or ideas on how you can get started in your own life. Comment below and let’s start a conversation together.